The evening begins to settle and the campers retire for the night. As darkness rolls in, the moon rises above the mountain’s horizon and throws its beams of light through the branches of a huge, gnarled gum tree.  Small native animals scurry for shelter, under cover of the tree’s boughs.  The tree has witnessed many moon rises like this, and bravely faces the darkness, a lone sentinel in an otherwise stark landscape.   He cannot share his knowledge and experiences with the animals;  he can only extend his  branches in friendship;  to give protection, warmth and security.

A little brown field mouse skips from one bush to the next and then stops and listens. A flying fox casts a shadow overhead as its wings flap with barely a sound as it moves onto a new place to settle. A camper stirs and gives a faint snort before returning to his slumber.  The mouse stops in its tracks; the noises are swallowed by the silence and deepening darkness and the mouse continues on its journey.

The distant howl of a dingo echoes through the valley, announcing to the creatures of the night that danger is not far away. The camp fire slowly burns itself out and now only the embers are glowing, providing the last glimmer of heat and light.  The nearby stream continues its relentless journey south, bubbling over rocks and shimmering in the moonlight.  Under the cover of near –darkness, unseen little creatures scurry from the relative safety under the old gum tree to the stream to replenish their little bodies before finding a safe place to sleep.

A thick mist rolls up, enveloping everything in the valley, including the campers, safe but unaware in their cocoon of canvas.   The hours of darkness eventually fade to grey and the creatures begin to stir and furtively  look for food.  The campers wake and re-kindle the long since dead campfire.  The early morning quiet is shattered as pots and pans clang and announce that breakfast will be simple but cooked.  The campers have no cognisance of the intrusion their presence has on the delicate balance of nature.

The old gum tree has witnessed another night as the fading moon slips away.  He knows everything that happens under the shield of darkness but is not forthcoming.  The sun slowly takes the moon’s place and the morning comes to consciousness.

The brilliant morning sun darts out dancing rays, instantly warming everything they touch.  Cockatoos awaken and wander aimlessly, squawking their way from tree to tree.   The campers, satisfied and nourished, pack away their gear and move on.  They leave little evidence of their presence, except for a patch of flattened grass and a pile of cold, black ashes.  The little creatures are curious but dare not tread on the earth where the intruders rested.  The old gum tree looks down at their naivety but gives nothing away. 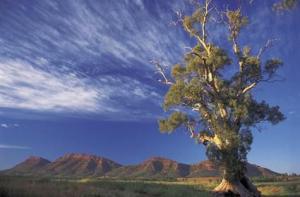 As the brutality of the hot day once again begins to waver, only the highest mountain peaks remain golden.  The little creatures return to safety under the old tree.  As the sun slides away, the full moon shows its face; huge, happy and magnificent.

Tonight no-one will be shrouded in darkness;  instead they are bathed in moonlight and although they feel a little exposed, they know the wise old gum tree will once again stand guard.

My name is Kylie and I am an emerging writer living in the Southern Hemisphere. I enjoy writing anything from snippets to short stories to memoirs and reflections.
View all posts by South Bound →
This entry was posted in Short Story and tagged bush, gum tree, heat, moon. Bookmark the permalink.

Written words from a (not so) witty wordsmith.

A Taswegian in Finland

From Hobart to Helsinki (and beyond!)